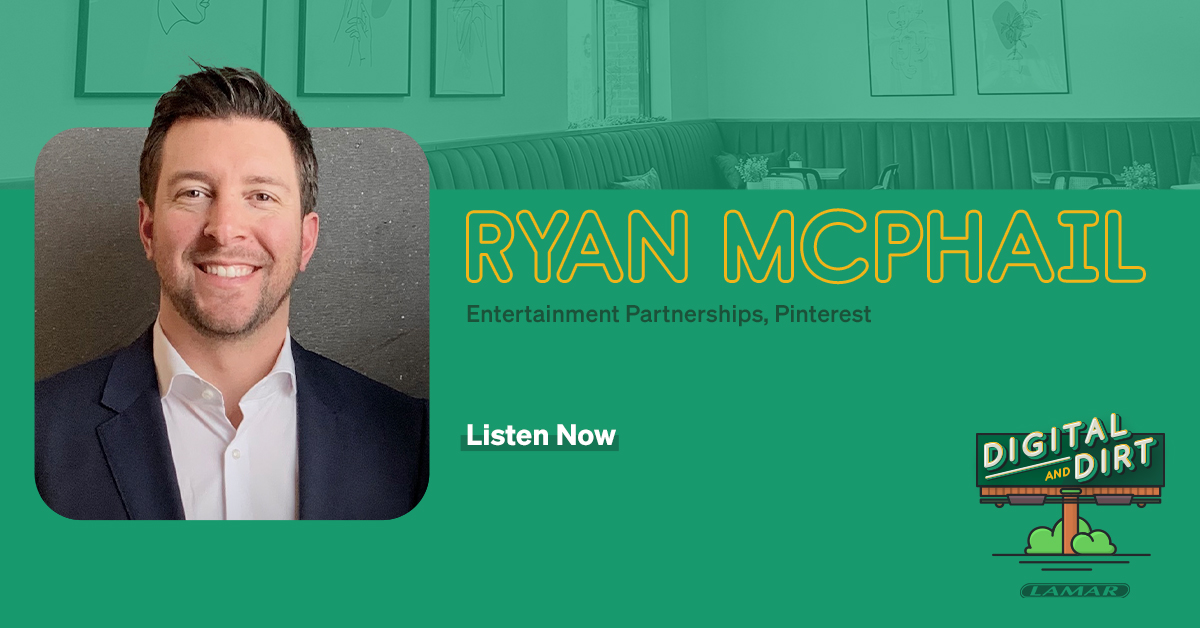 In episode 8 of this season’s Digital and Dirt podcast, Ian welcomes Ryan McPhail, Entertainment Partnerships at Pinterest, to discuss his path from Out of Home to Pinterest and his passions outside of Pinterest which include entertainment, restaurants, and Porsches.

Many people learn positive habits at a young age. Ryan explains how he learned about responsibility and attention-to-detail from working on cars and going to car shows with his grandfather when he was young. He garnered a love of Porsches, as a result of those experiences, and tells Ian about the cars he now owns and how the skills he learned working on cars translates to his career today, earning him the nickname, “Mr. Polish”.

Ryan discusses his struggles with some elements of school while growing up. He was diagnosed with dyslexia at 28, which finally helped him to understand the source of his struggles. Ryan says dyslexia does not always present as the typical mixing of letters and, as a result, many people go undiagnosed. His academic challenges lead him to focus on sales and visual elements, skills he uses and excels at in his career today.

Ryan began his career in OOH working on many impressive campaigns in Los Angeles. His work on the Entourage campaign lead to the creation of TMZ bus tours. He was recruited to join Pinterest, a platform he already used and enjoyed. Being a visual learner, it wasn’t difficult to make the leap after meeting the great staff.

Pinterest is a one-of-a-kind platform. While it has social components, it differs from typical social media platforms. Ian and Ryan briefly discuss Pinterest’s new app, Shuffles, and the new marketing campaign designed to differentiate Pinterest from other apps.

Lastly, Ryan discusses his work in entertainment and hospitality, explaining how he got started and has grown in those industries. He talks about his most recent restaurant in Cult Santa Monica, where he painted all the artwork based on inspiration from Pinterest. Before wrapping up the episode, Ryan offers a preview of his new company, Fetcha.

To learn more about Ryan McPhail and Pinterest, listen to the full Digital and Dirt episode available on Apple Podcast, Spotify, Google Podcast, and other podcast platforms!