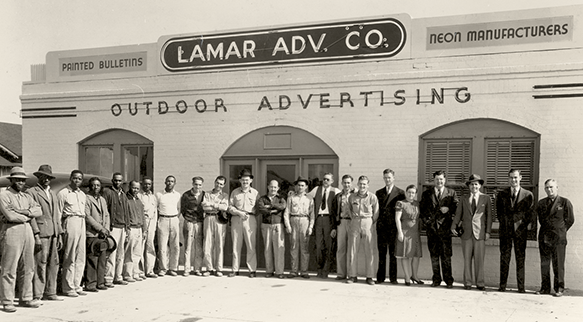 BLOG / Our History | Lamar Advertising
Out of Home
News
Posted by:
Claire Lakvold

A simple flip of the coin in Pensacola, Florida landed Charles W. Lamar Sr. the opportunity of a lifetime.

In 1908, when Mr. Lamar and J.M. Coe decided to dissolve their three-year partnership, a coin toss was used to divide their assets: the Pensacola Opera House and the Pensacola Advertising Company, the small poster company created to promote the Opera House. Mr. Lamar lost the toss, and was left with the less-lucrative poster company, which he renamed Lamar Outdoor Advertising Company. Over the course of the next century, Mr. Lamar and his descendants built Lamar Advertising from a small sign company on the Gulf Coast into one of the largest providers of Out-of-Home advertising in the nation.

Through generations of commitment, integrity, and innovation, Lamar has changed the nation’s landscape while still maintaining the character of a family business.