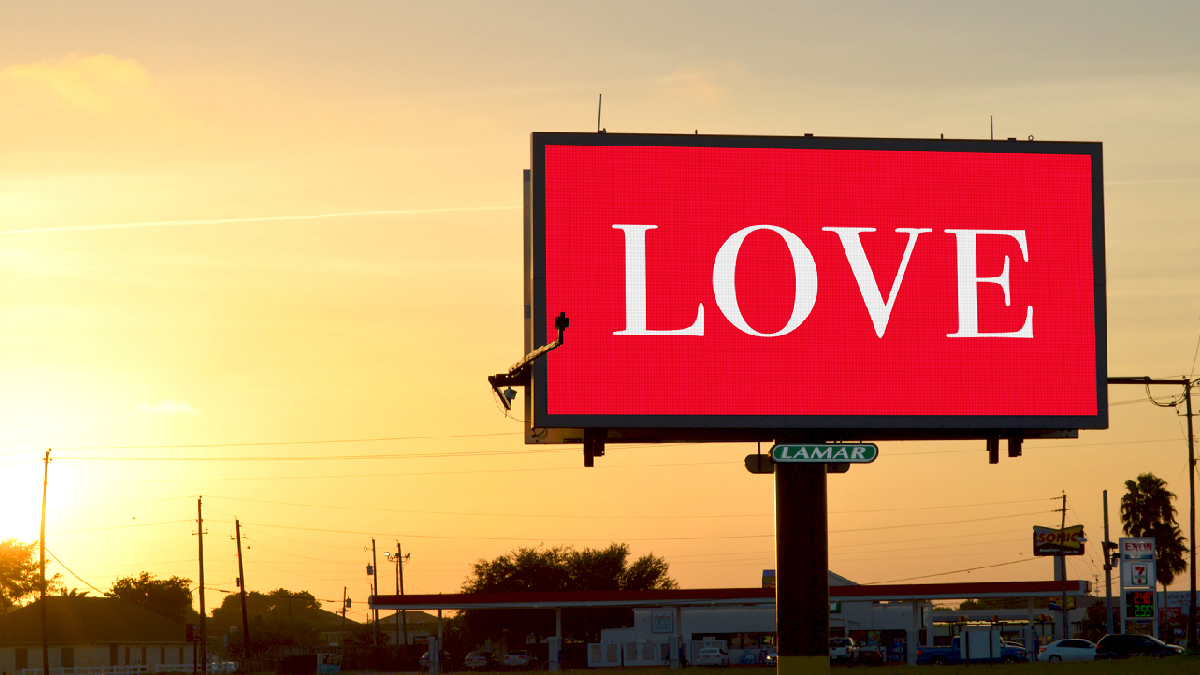 BLOG / Lamar Advertising to Use National Digital Network to Spread ‘Love on Every Billboard’ This Valentine’s Day
Out of Home
Press Release
Posted by:
Claire Lakvold

Baton Rouge, LA – February 11, 2022 – Lamar Advertising Company (Nasdaq: LAMR), one of the largest outdoor advertising companies in the world, today announced that the company is supporting the ‘Love on Every Billboard’ campaign by donating space on digital billboards across the U.S. During Valentine’s Day weekend, Lamar billboards will display the campaign’s single word message – Love – in white lettering on a red background.

“At a time where there are so many complex challenges facing all of us, we thought that there couldn’t be a better message to spread than the comparatively simple, yet all-encompassing expression of 'love' across the country,” said Allie McAlpin, VP of Marketing Services and Communications at Lamar Advertising. “Our national billboard network has the power to reach and influence people with simple and memorable messages. We’re looking forward to spreading as much love as we can this Valentine’s Day.”

Founded by John Pogachar, Love on Every Billboard is a nonprofit organization that has been displaying its one-word message of ‘Love’ on billboards across the U.S. and around the world since 2018. Fueled by donations, the organization has showcased the message on 161 billboards in 17 U.S. states as well as on billboards in Austria, Canada, New Zealand, UK, Russia, and Ukraine. The campaign has been featured on the TODAY Show, in a Jason Mraz music video, and will be the subject of a documentary featuring Lamar’s involvement that will include an interview with Lamar CEO Sean Reilly.

“It truly can’t get any simpler than that, just LOVE,” said Pogachar. “We are so thankful to Lamar for their support of our campaign. Sean Reilly and his team could not have been more gracious as they welcomed us into their corporate headquarters and allowed us to shoot film for the documentary.”

Pogachar will be the featured guest on a special edition of Lamar’s Digital & Dirt podcast to air during the week of February 14th.

‍
About Lamar Advertising Company
Founded in 1902, Lamar Advertising (Nasdaq: LAMR) is one of the largest outdoor advertising companies in North America, with over 351,000 displays across the United States and Canada. Lamar offers advertisers a variety of billboard, interstate logo, transit and airport advertising formats, helping both local businesses and national brands reach broad audiences every day. In addition to its more traditional out-of-home inventory, Lamar is proud to offer its customers the largest network of digital billboards in the United States with approximately 3,900 displays. Please feel free to explore our website www.lamar.com or contact us at hello@lamar.com for additional information.

About John Pogachar
Children’s Author, life coach, and founder of Loveoneverybillboard.com. John can be reached for comments at 509-995-0107 or jpogachar@aol.com.