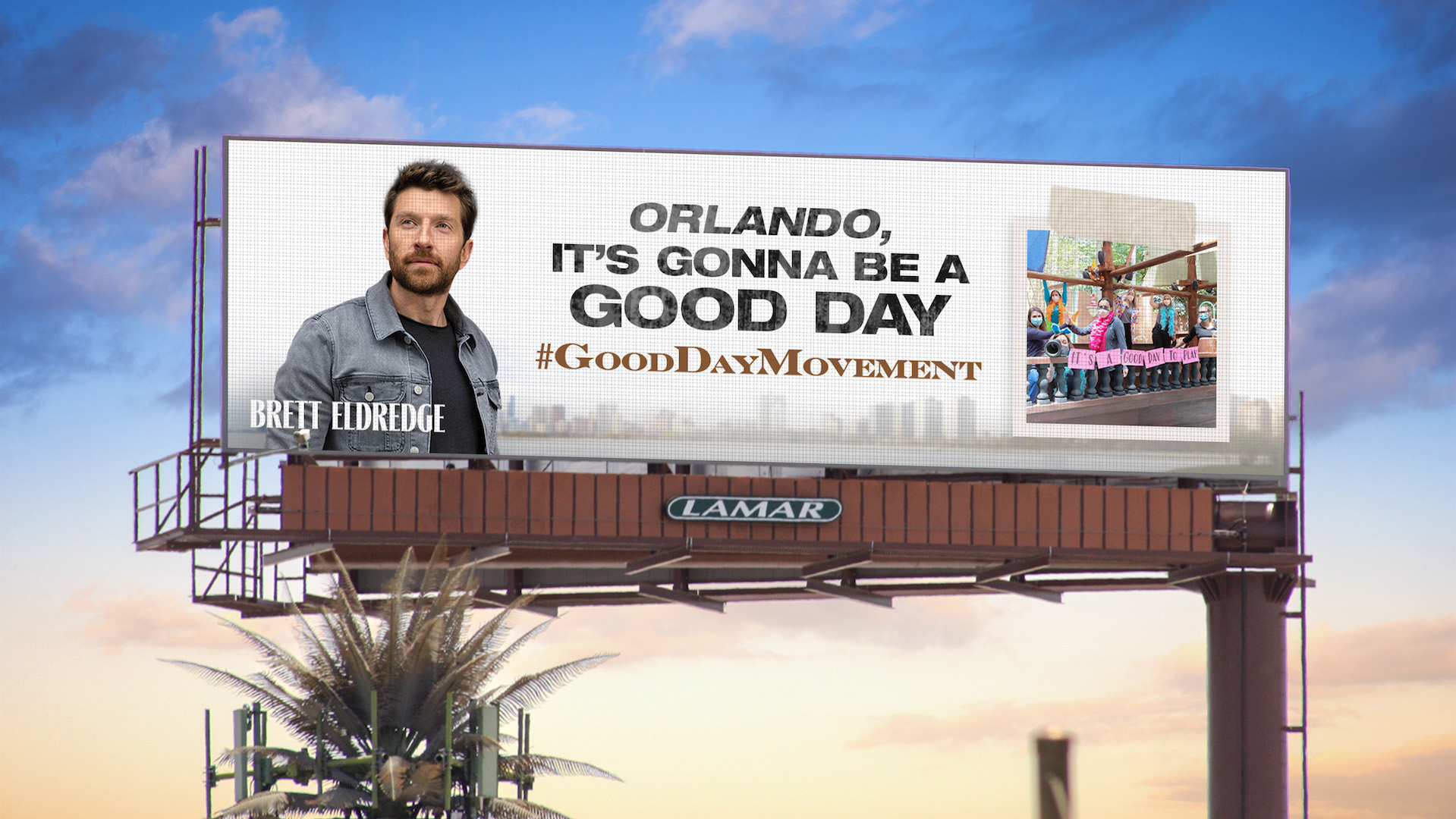 ‍
Baton Rouge, LA – April 6, 2021 –  Lamar Advertising Company (Nasdaq: LAMR), one of the largest outdoor advertising companies in the world, has teamed with Warner Music Nashville and country music superstar Brett Eldredge for a digital billboard campaign designed to shine the light on the good works and deeds of his fans, with the goal of inspiring others to do the same.

‍
As part of the recently launched #GoodDayMovement, Lamar is currently displaying selected images of members of Brett’s fan club, The Locals, and the great things they are doing to uplift their communities. The images can be seen on Lamar digital billboards in Chicago, Indianapolis, Nashville and Brett’s hometown of Paris, IL. Fans can continue to submit images with the #GoodDayMovement hashtag via Brett’s social media channels throughout the duration of the campaign.

‍
“By using the power of our national digital billboard network to promote and generate awareness of the great things Brett’s fans are doing in their communities, we believe that others will be inspired to do the same,” said Ian Dallimore, Vice President of Digital Growth for Lamar Advertising Company. “We are excited to partner with Brett and applaud his efforts to mobilize his fan club for an uplifting purpose.”

The #GoodDayMovement campaign launched on April 1 and will run in over 20 markets for 6 weeks. This movement is inspired by Brett’s new single, “Good Day,” written by Eldredge, Daniel Tashian and Ian Fitchuk. The song walks listeners through the powerful process of positive thinking (LISTEN HERE). The official music video features members of Eldredge’s fan club, The Locals, paying it forward in their communities (WATCH HERE). The track is featured on his fifth studio album, Sunday Drive, which was named to Best Of 2020 year-end lists by Rolling Stone, Esquire, Nashville Scene and more.

Eldredge recently spoke with People, who describes “Good Day” as “a sunny shot of hopefulness that's sure to be infectious — in the best way, of course,” and explained how the track relates to his journey of self-discovery (READ HERE). He previously chatted with Good Morning America about the song’s optimistic message, how therapy has changed his life and the mental health practice of manifesting outcomes through visualization that has been an important part of Eldredge’s journey over the past few years (WATCH HERE).

‍About Lamar Advertising Company
Founded in 1902, Lamar Advertising Company (Nasdaq: LAMR) is one of the largest outdoor advertising companies in the world, with over 357,500 displays across the United States and Canada. Lamar offers advertisers a variety of billboard, interstate logo, transit and airport advertising formats, helping both local businesses and national brands reach broad audiences every day. In addition to its more traditional out of home inventory, Lamar is proud to offer its customers the largest network of digital billboards in the United States with over 3,600 displays. Please feel free to explore our website www.lamar.com or contact us at hello@lamar.com for additional information.‍

About Brett Eldredge
With his critically acclaimed fourth studio record, country superstar Brett Eldredge takes fans on an unforgettable outing with his new album Sunday Drive. Joined by GRAMMY-winning producers Daniel Tashian and Ian Fitchuk, he journeyed to Chicago’s intimate Shirk Studios, where the album came to life. As a mental health advocate, Eldredge pulls from a personal place with the current single “Good Day,” which brings the message of keeping a healthy mindset. “Good Day” follows the wistful, piano-driven lead single “Gabrielle,” which made its TV debut on The Late Show with Stephen Colbert and has been called “a breath of fresh air” by Rolling Stone. Having added a seventh country radio No. 1 to his name with “Love Someone,” the critically acclaimed entertainer filled arenas on his first ever sold-out headlining The Long Way tour, which included performances of his Gold and Platinum-certified singles spanning four albums. For more information: Facebook // Twitter // Instagram // Website‍

About Warner Music Nashville
Warner Music Nashville was created in 2009 under the leadership of Chairman & CEO John Esposito. It continues to champion Warner Music Group’s presence in the Nashville music community its family of labels have called home for more than 60 years. Esposito’s dedication to innovation and artist development has allowed WMN to make history time and again, with 67 No. 1 singles from artists spending more than 94 weeks at the top of the charts. This success has resulted in a quadruple increase in market share over the past decade, with the roster receiving multiple awards and nominations from the Academy of Country Music Awards, American Music Awards, Billboard Music Awards, Country Music Association Awards, GRAMMY Awards and more in a full range of categories, from New Artist to Entertainer of the Year.