goodr Partners with Lamar Advertising to Launch a Billboard Campaign in Carl, GA 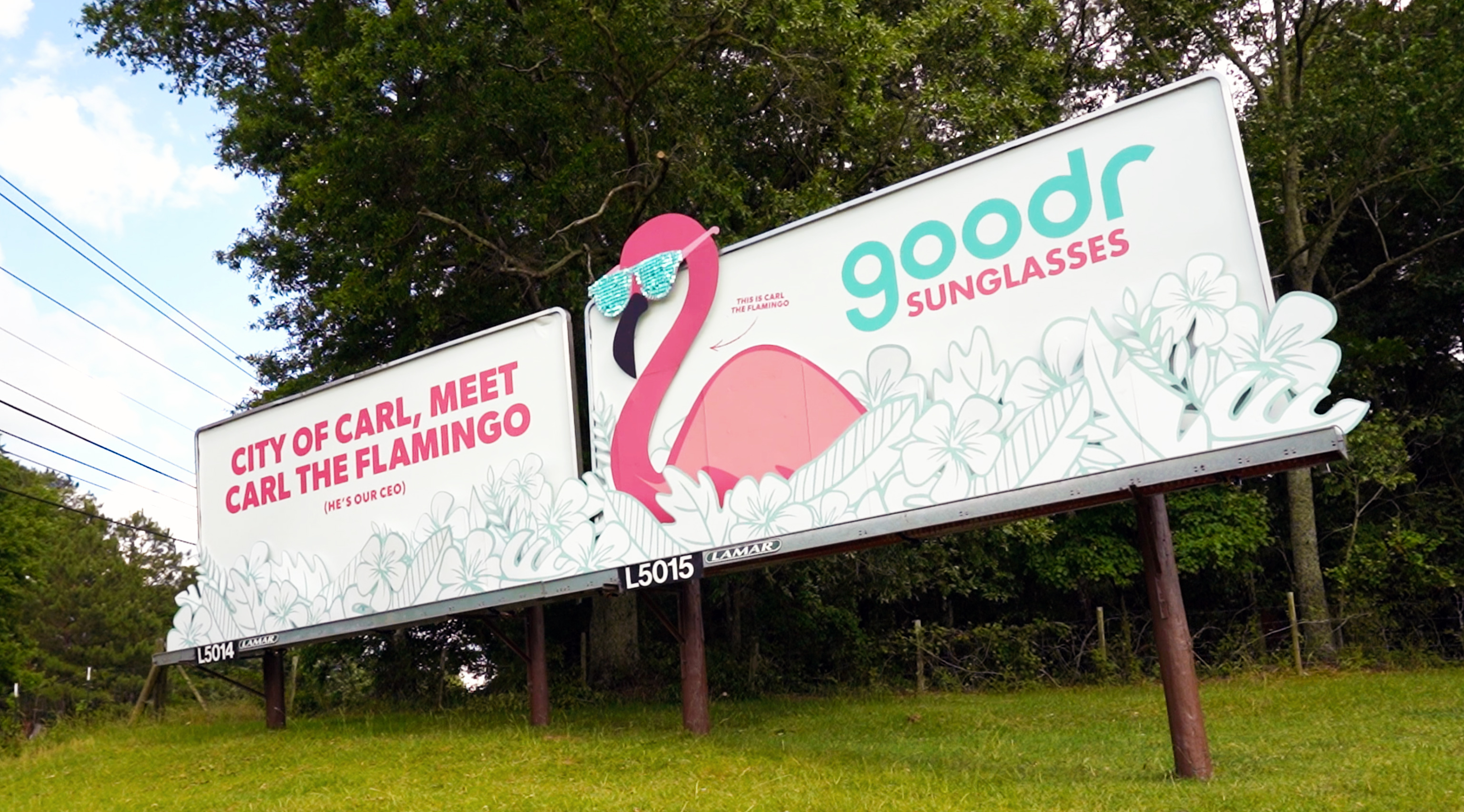 BLOG / goodr Partners with Lamar Advertising to Launch a Billboard Campaign in Carl, GA
Press Release
Out of Home
Posted by:
Claire Lakvold

goodr Partners with Lamar Advertising to Launch a Billboard Campaign in Georgia Town with Just 269 Residents—Why? Because They Can.

Athletic eyewear brand makes its mark on Carl, GA by canvassing the town with their avian mascot and CEO, Carl the Flamingo

CARL, GA (June 16, 2022) — goodr, the brand known for its budget-friendly active sunglasses and irreverent approach to marketing, is thrilled to announce its first large-scale awareness campaign in collaboration with Lamar Advertising, which will take an approach unique to the absurdity that is goodr.

goodr is an active sunglasses brand that was founded in 2015. The brand was initially only available direct-to-consumer and has since expanded its footprint to include over 5,000 retail stores including Dick's Sporting Goods, Nordstrom, and REI.

This year goodr made the decision to invest in its first large scale awareness campaign. They took a twofold approach to awareness: they did the normal things that go into an awareness campaign and then asked themselves, “How can we make this weird? How can we goodr-fy a basic marketing campaign?!”

And then came Carl, Georgia, a town with a population of 269 located 43 miles from Atlanta. To provide some background, Carl the Flamingo is goodr's mascot and honorary CEO. To promote Carl the Flamingo to the citizens of Carl the town, goodr worked with Lamar Advertising to purchase 10 billboards across the town and plastered Carl the Flamingo’s face on them with the words “Carl, Meet Carl the Flamingo.” No real call to action. No product push. Just a simple way to let Carl residents know that their town shares a name with goodr’s CEO, while staying true to the brand’s core absurdity.

“Is this a priority market for goodr? No. Will we see a significant lift in sales by pursuing this campaign? Probably not. But we did it anyway because goodr will always be a brand that does weird things just for the fun of it,” says goodr CEO Stephen Lease. “Our approach to marketing is standing out, whether we’re purchasing billboards in a small town in Georgia or sharing images of fully grown adults running a mile dressed up as meatballs, because why fit in when it’s so much easier to stand out?”

“Along with its proven ability to reach and engage consumers with a simple message, Out of Home offers brands like goodr the opportunity to elevate awareness of their brand in an ultra-creative manner and within specifically targeted geographic areas,” said Ian Dallimore, VP of Digital Growth of Lamar Advertising. “The ‘Carl’ campaign is certainly a great example of a brand using our billboard network in a highly unique way and we enjoyed working with the goodr team to bring it to life.”

The billboard campaign will run in Carl, GA, as well as in 13 additional markets across the U.S. The brand will also be working on a social media campaign in which Carl goes head to head with the actual mayor of Carl. goodr will also be giving away over 200 pairs of its most popular sunglasses at a local restaurant to show some love from Carl to Carl.

We exist to give you permission to be unabashedly yourself...unless you’re an asshole. Since 2015, we’ve made polarized sunglasses that speak to the four F’s: Fun, Fashionable, Functional and ‘Ffordable. goodrs can be purchased directly at goodr.com; at our Los Angeles-based retail store, the goodr Cabana; and through leading national retailers like REI, Dick’s Sporting Goods, Tilly’s, and more. goodrs don’t slip or bounce while running, beasting, biking, golfing, or gaming. goodr is the three-time recipient of Runner’s World Gear of the Year, so we know we’re doing something right.

Founded in 1902, Lamar Advertising (Nasdaq: LAMR) is one of the largest outdoor advertising companies in North America, with over 356,000 displays across the United States and Canada. Lamar offers advertisers a variety of billboard, interstate logo, transit and airport advertising formats, helping both local businesses and national brands reach broad audiences every day. In addition to its more traditional out-of-home inventory, Lamar is proud to offer its customers the largest network of digital billboards in the United States with over 4,000 displays. Please feel free to explore our website www.lamar.com or contact us at hello@lamar.com for additional information.